The Seeing Eye, located in Morristown, New Jersey, is the oldest guide dog school in the world. Since 1929, they have provided over 16,000 canine partners to people who are blind or visually impaired. Each one has an inspiring and unique story to tell.  Here are a few of them.

Becca Meyers, of Baltimore, Maryland, is a world record-holding distance swimmer. In 2014 she set two world records and earned 6 medals (4 gold and 2 silver) at the Pan Pacific Para-Swimming Championships. She also won the 2015 ESPY award as the best female athlete with a disability.

“He started making fun of how short I am. I stepped up to the bar and did 12 straight pull-ups. That shut him up.”

Becca is majoring in history at Franklin & Marshall College. As she walks around campus, Birdie is right there, guiding and walking with her. 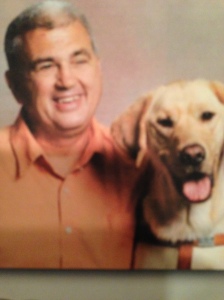 Frank Gaudioso, Jr. of Newburgh, New York recently returned to The Seeing Eye for his fourth guide dog, Arthur, a yellow Labrador/golden retriever cross. A top high school athlete, Frank was jumpstarting a car when the battery blew up in his face. Never giving up on his love of sports, he attended the University of South Carolina-Coastal and majored in physical education. He went on to get a master’s degree from the State University of New York at New Palz. Frank admits that it is tough to get your foot in the door in sports when you are blind. But he convinced everyone that he could do it and has been a coach in baseball, soccer, volleyball, basketball, and softball for 25 years.

Vincent Martin is a paralympian.

“My best event was the discus. Only one other totally blind person has thrown a discus farther than me. I missed breakng the word record by a few feet.”

Vincent came to The Seeing Eye for his first dog in 2011. Here he is shown with his black Lab, Karson, on the campus of the Georgia Institute of Technology, where he is studying to get his Ph.D. in human-centered computing — his fifth degree.

“Of course you hear anyone who has had a Seeing Eye dog talk about the added independence that such a special guide will bring to one’s life,” says Richard Quan, a lawyer living in York, Ontario. “What I’d like to stress is something that is felt by every one of us who have a special relationship with such a working partner. For me, a Seeing Eye dog has taught me how to share my life with another living being, to accept each other on nothing but trust alone, to take care of each other’s needs and to ultimately be able to let go –maybe not so easily, but with some semblance of dignity.”

The Seeing Eye is supported solely by donations from individuals, corporations, and foundations. For more information on this organization and how to help put miracles in motion visit http://www.SeeingEye.org.

One thought on “MIRACLES IN MOTION”